Auckland author Yvette Carol, author of the Chronicles of Aden Weaver trilogy, answers a few questions about her life as a writer.

Have certain authors or books you’ve enjoyed been part of your inspiration to write? Why?

As a child, I loved The Chronicles of Narnia by C. S. Lewis because of his fabulous imagination. New worlds and concepts always drew me to fantasy fiction. My mother and sisters were fans of the Moomintroll series of books by Tove Jansson, and I would take out one of the Moomin books from the school library at a time and savour them. Tove was inspirational with her masterful world building and nonhuman cast. She deeply influenced my thinking about creative fiction. Tove offered glimpses, sneak peeks beyond the fetters of this life, and that is the secret message that is beautiful and empowering to pass onto children. There is more. Open your hearts and minds and expand the possibilities.

I love the empowerment that forms the core of children’s literature. When I approached writing my first story, I did so with a sense of limitlessness. I didn’t feel my characters needed to be human for me to care about them.

In more recent decades Brian Jacques has been an enormous influence, specifically the Redwall series, which a friend, author Lorraine Orman, recommended I read about twenty years ago. When Lorraine learned of my bent towards anthropomorphic characters, she suggested I read the Redwall books as no one did anthropomorphic stories better. Naturally, I started reading them then and I’ve loved them ever since. Jacques is my hero!

When did you start writing?

I began adult life at seventeen as a teenage mum.

My “go-to” when I needed to escape the drudgery around me as a cooped-up teen mother was to climb out the bright window of my imagination. I wrote stories like those I had most enjoyed reading as a child. I grew up on fairy tales, myths, and legends then moved on to fantasy chapter books, like Wind in the Willows, The Water Babies, Peter Pan, Alice in Wonderland, The Wishing Chair, The Faraway Tree, The Moomintroll stories, The Narnia Chronicles, and The Lord of the Rings.

From the get-go, my stories were fantasy fiction for children. My first ever story, The Scrifs and the Stirrits, featured a quest type adventure with anthropomorphic characters set in a different world, which is an accurate description of my current trilogy, The Chronicles of Aden Weaver.

I found that writing magical fantastical stories came easily. It was like breathing; I felt free. I frolicked around in the meadow of make believe creatures and fantasy lands and had so much fun that has been my niche ever since.

Some people mock the genre, although since Harry Potter, fantasy has become more popular. I believe writing this genre has kept me sane and well throughout every trial and tribulation in my life, and I can’t wait to see what stories are yet to come. It always gives me something to look forward to.

When did you get serious about approaching publishers or indie publishing?

As a teenage writer, one of my writing tutors along the way told me in no uncertain terms, “Put down your pen and go out and live your life. You’re too young. Live first and then write.” She gave me the feeling writing stories was something I should not be doing, or leastways, I should tell no one else I was doing it. I remember the shock I felt at her words, because stopping was not an option. After that, I kept my stories to myself for the next ten years.

When I started submitting to traditional publishers in New Zealand, I was in my early twenties and I only came close to being published twice. My love affair with the rejection letter had begun. That was the late ’80s and early ’90s, when fantasy fiction was not yet in vogue. Responses varied from “fantasy doesn’t sell” to “no one is interested in fantasy fiction” and anthropomorphic fantasy fiction was so far left of the field that I often couldn’t even get past the submission form requirements. I stopped submitting to publishers.

For a long time, I continued to write stories and keep them in a drawer.

Then, along came a little company called Amazon. The self-publishing phenomenon gained momentum and some of the stigma around indies dissipated. An option I had never considered before suddenly had legitimacy. I could publish my own stories, which was very exciting, and so I began working towards that end, releasing my trilogy, The Chronicles of Aden Weaver, in 2020. It took me thirty-five years to go from my first story to a published trilogy, but then, good things take time.

Find out more about Yvette Carol on her author page and have a look at Yvette’s incredible fantasy trilogy available in print from Kiwi Kids Read Kiwi Books. 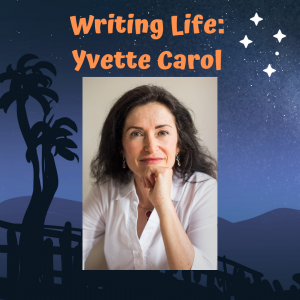 Subscribe to our monthly newsletter to hear about new books, book reviews, our awesome Kiwi authors and illustrators, and special offers!
Subscribe here

Find out more about the talented Kiwi authors and illustrators creating books for kids and teens. The Meet Kiwi Authors section is worth a browse.
Learn more
Create a new list